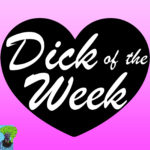 Dick of the Week
DotW: RWA- It's Not Awesome

Okay team, the first half of this Dick of the Week is Liz and Stephanie playing catch up with each other and their lives and plans for 2020. The second half is us trying to tackle the big giant mess that is the RWA (Romance Writers of America).

As the holidays were upon us, a big mess of racism and unfair treatment to historical romance writer Courtney Milan. Race issues unfortunately is not a new problem in the organization but shit really hit the fan and still going on. We try to explain what happened in December until now. We are not experts in this matter but have been trying to keep up with each new occurence as information has been released to us.

Due to the matter of this episode, we did not give any romance novel recommendations, but that will be back in our next episode. ❤